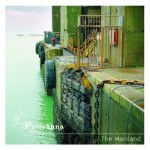 Guitar on her back, Pollyanna takes one final glance back at old Europe, full of history and memories, then steps firmly forward toward the New World … or, at least, that’s the story suggested by Pollyanna’s second album, “The Mainland,” its cover-art showing a pier by the northern sea, open to the horizon.

We discovered Pollyanna, a Paris-based project lead by Isabelle Casier, back in 2008 with her first album “On Concrete,” a wintery record influenced by her Northern roots that suggested a cultural crossroads between England, Belgium and France. Seduced by her clear, heart-warming voice and the magic of the band’s arrangements, we were reminded a little of the edgy charm of The Do. But Isabelle is hardly one for strict traditionalities, and was soon bored of being labelled as another French folkster singing in -good- English. And so, despite a natural flair for minor chords and melancholy, Isabelle’s cheerful presence, eclectic taste and experiences as an outsider (in Europe, the USA, South America…) opened up her musical field to all things pop, rock and folk.

After her playing with her first rock band in Marseille in the late 90s, (and, with them, supporting great acts like Dominique A, Sleater Kinney and Polvo), Isabelle moved to Paris and founded Pollyanna. First a duo, then a solo act, it led her through an ambitious international touring circuit, from England to Germany to New York to Tennessee… along the way sharing the bill with local indie bands and bigger names like Wilco, Bright Eyes and the French chanteuse Françoiz Breut. From acoustic strummers at the Folk Alliance in Memphis to riot grrls in Hamburg, all this moving around gave the Pollyanna sound openness and freedom, as well as helping Isabelle scoop up a bunch of fellow musicians.  The current band (as represented on “The Mainland”) is, not surprisingly, an international offering, with a Parisian cellist, a Breton drummer, a Canadian viola player and a German violinist…

The addition of all these strings suggests the recent album has shifted back in a folk-direction, and so it sounds on certain tracks like the woodsy cocoon of “Real Life”, or the nonchalant “Bruxelles,” or, finally, the aptly named “My Favourite Song” . However, Isabelle is also a big fan of volts and batteries and whimsy and surprise, and, overall, “The Mainland” is a whirlwind tour of styles and sounds, from Power Pop (“Old Rockers”) to Country (“Broadcast in Heaven”), to Steady (“Tiger”) and, even, Calypso (“I Wish I Worked in a Factory”). But don’t let the varied richness of the twelve tracks’ arrangements fool you, at its heart, this album has a straight-forward honesty that cuts through both the lyrics and the music, and Isabelle’s voice is the core at the center of it all, poised and clear.

“The Mainland” plays across the spectrum of nostalgia before, finally, taking your hand and gently but firmly leading you on to voyages new. As Pollyanna has proven, true salvation lies only in momentum. “I’m Moving On.”